“My dream is of a place and a time where America will join together breakfast and lunch, let’s say around 11:30?” – Abraham Lincoln

Okay, that was half a Lincoln quote. But by itself, is it still not accurate? As a working American with limited obligations, I revere a casual brunch. It’s one of the better portmanteaus in the English language, right up there with “Jorts” (because it sounds exactly as they look). What’s the worst of them? “Guesstimate” because “estimate” does the job without being an asshole about it, celebrity couple nicknames because—gross, and “Spork,” the middle finger of plastic utensils. But I digress.

Brunch gets a bad name. You’ll see it demonized as too hipster or elitist. This position is often held by browbeat humorists who are so fixated on whatever it is to be a “bro.” Also, cool it with the “hipster” designation. Actual hipsterism is fun to call out so stop diluting it. Just because it’s not Arby’s doesn’t mean it’s hipster.

When you take a closer look, brunch is the full embodiment of American values. In a lot of ways it’s a perfect democracy right there on a restaurant patio from roughly 10 AM to 2 PM. Life, liberty, and the pursuit of happiness is personified in your ability to have a short rib taco next to a pancake. To have a coffee mug join side by side with a champagne flute. Give me your tired, your poor, your huddled masses, as we can do separate checks and it’s $10 bottomless mimosas.

Brunch is also a peaceful assembly, regardless of motive. You may be treating a bad hangover, concluding a neighborhood stroll, relaxing over the Sunday paper, or upgrading a quick breakfast to a “Sunday Funday” because your friends will celebrate almost anything to justify getting drunk before 60 Minutes—“So I flossed twice this week! Omelets and champagne?”

Brunch does not discriminate. Like the piers of Ellis Island, all walks of life are welcome. Everyone has a story, and a late morning on the weekend usually involves a good one. The dress code is fast and loose. I’ve been in my Sunday best and my Sunday worst. The display of attire is without bounds. I won’t even discourage the cycling crowd of men who are way too old to be stuffing themselves in bike shorts. Sir, your vitality is commendable. Oh, and your balls are showing. Go ahead and throw a napkin over that moose knuckle, thank you.

America’s liberty has always been personified by our capricious reasoning to eat and drink in excess. Brunch champions this by designing a menu with the same freedom a 3 year old has when they find permanent markers—anything fucking goes!

Can’t decide between waffles or eggs and sausage? You don’t have to. It’s a sandwich called the “Eggo n’ Eggs.” Would you like a side of bacon or fruit? I’ll have the fru— Bacon! Bacon should be fine.

What are the breakfast nachos like? Picture a bed of crispy tortilla chips, and then smother them in everything you rank higher than sex.

You need coffee, but you want whiskey? Pour them in the same mug and give thanks to our Irish immigrants. Sláinte.

Wishing your orange juice gave you vitamin C and a classy buzz? Get your doses in Mimosas.

Hate the bitterness of grapefruit, but want its many health benefits? Order it fresh squeezed and drown it with an armada of tequila. A few of those and you’ll feel good about blood lipid levels and asking other tables if you can have their dog.

I even have a friend that swears by ordering a piece of cheesecake with his breakfast ham. I know it sounds gross, but to be fair, he’s fat. 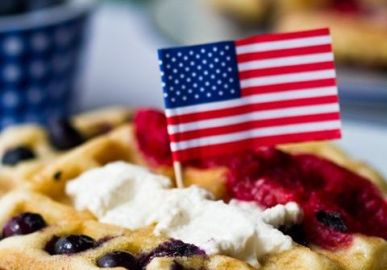 In America, you are free to pursue the life you want most. And that person often wants a day off from that pursuit to enjoy a lazy Sunday with their friends. They want to get together and have the type of conversation only friends can have. A discussion about our thoughts on the GOP Primary will precede a debate over who would be the first of us to eat a found bratwurst.

Friendly banter works like that. Brunch is an opportunity for us to get together and use humor to cut through obscurity. We’ll certainly talk juvenile nonsense, but I also know we’ll steer jokes at trivial things to see where we land. Humor creates a safe space, and in that space we can engage in substantive issues and come out with a stronger view.

Comedy is a powerful weapon for the 1st amendment because it disarms the occupancy of hate. Maybe if more decision makers sat down and told a few zingers over a plate of pancakes we’d see our basic principles more clearly. Contention is propagated by those that take themselves too seriously. And progress is propagated by those that take things with a grain of salt—preferably celery salt that lines the rim of a Bloody Mary. I know this works for me and my friends. We’ll grab a table, order some drinks, and begin witty civil discourse. When I get done telling my friend I bet he dreams of being naked at a dildo factory during a tornado, we’ll transition to a cooperative discussion about climate change. 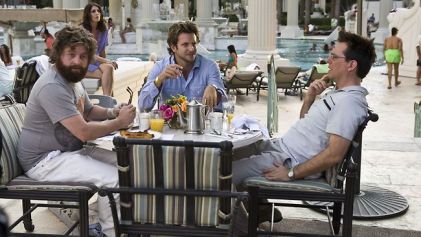 The combination of day drinking and unfettered food fare is incorruptible, but no democratic system is without its blunders. So who is the James Buchanan of brunch? My vote goes to the sloppy Make your own Bloody Mary bars. A concept I initially endorsed, but quickly retreated—similar to road trips and Big League Chew. My protest is simple. I’m lazy on weekends because, well, I get to be lazy. So when I order the drink that serves as the pillar of the brunch cocktail menu, that does not mean I want to build the pillar. Silly as this sounds, I came to a restaurant to pay for someone to serve me food and drinks.

I love Bloody Marys, but I’m no bartender. With full access to all the spices and garnishes it entails, I do not end up with a refreshing late-morning cocktail. My final product is an overloaded mess and a sizzling trip to the toilet. It’s one that leaves you fairly certain what a colonoscopy with a curling iron would feel like. As our forefathers discovered, we need regulation. We need a little oversight. Without it, everything turns to fiery shit.

A rebellion of vodka and tomato juice aside, brunch remains an indivisible pastime. I will always pledge my allegiance to it for as long as I have friends that acknowledge, “Yeah, I could eat.”  That said, I should point out that as loyal as I am to the occasion, I rarely participate in it. I like Sunday mornings at home and I don’t have the budget to make brunch habitual. Quite frankly, six dollar Zing-Zang and the vodka in my freezer make a hell of a Bloody Mary at home if anyone wants to come over.

But as I sit on my couch on a Sunday morning watching Meet the Press during a very divisive and hateful election year, listening to the vile people have about who marries who or who prays to what, I could use a friendly atmosphere and a menu built on collaboration. There is real American symbolism in ordering food that has no business being on the same plate together, but manage to make it work so beautifully. Separate things that are equally as good, joined together by the common interest of brunch. The state of this union is strong.