Sometimes I feel sorry for Valentine’s Day. It sits smack dab in the middle of the worst month of the winter and the mere mention of it is proceeded with rolling eyeballs. It’s become the punching bag of holidays the same way Chris Berman has become the punching bag of sports journalism. Only one of them really deserves it. And as if guys don’t get accused of not being romantic enough on Valentine’s Day, Hollywood has the audacity to release this 50 Shades of Grey movie the day before, prompting a subset of ridiculous women to be disappointed their man isn’t a kinky billionaire. I would protest 50 Shades of Grey with a corresponding movie for men to celebrate the same way, but we already have that. It’s called porn. I digress. Besides, women aren’t big fans of the day either. We all have similar reasons, but worse for them; they have to watch us inorganically compound sweetness into a forced day that we should be doing authentically in doses every day. It makes it all feel very artificial.

Valentine’s Day didn’t intend for the charade it’s become. If you believe this basis, it is remembered in part for Saint Valentine of Rome performing weddings for soldiers who were forbidden to marry dating back to 496 AD. (Soak that in for a second. Because there are still unrelenting fossils in positions of power who should absorb that even 2,000 years ago people knew it was wrong to give a shit who marries who. Stubbornness by nature is long lasting, but conversely it doesn’t age well). The Roman Emperor at this time believed unmarried soldiers fought harder because they weren’t afraid of dying and leaving their wives behind. This of course is a horribly flawed theory. Love is always at the root of what makes people fight hardest.

Eventually, Saint Valentine’s efforts warranted celebration. The Valentine’s Day baby was born. Now I am of the opinion that cute, golden haired babies packing a bow and arrow must be killed. They distract us with their chubby, giggly, baby-like wonder and suddenly we’re being fired upon amidst our adoration. This is what happened to Valentine’s Day. Our simple, singular focus is being attacked by piercing expectations. Give a baby a weapon and you risk it becoming a monster.

So you see the virtue of the holiday isn’t so bad. Origins of things are always more admirable. But what is it now? Yes, we all know because nobody (including me here) shuts up about it. Valentine’s Day is corporate greed at its finest. It’s an unfair burden put on relationships. It’s loaded with lazy clichés and stomach churning traditions. And even if your significant other has given you a pass, advertisers are there like homeless people at stoplights or girl scouts at your doorstep making you feel like shit for doing nothing. Evidently your relationship hinges on the right brand of chocolate. So you either indulge in the commercially driven diplomacy, or you protest it with snarky hipster cynicism. Both of these positions to their extreme are equally nauseating. If you’re in a relationship I suggest you choose somewhere in the middle and even if you fail miserably, an attempt at creativity is always braver than a resignation to conformity. If you’re giving her a giant stuffed bear holding a heart you might as well box up your genitals and give those away too.

That being said, I am still typically a Valentine’s Day hater. It’s not because of its profit driven “traditions.” Last I checked Valentine’s Day is not the only Christian founded holiday to submit to a commercial takeover. No, I’m presumably a hater on February 14th because it either makes me feel alone or it makes me do things disingenuously. When I’m single I’m surrounded by situations I wish I had, and when I’m with someone I feel pawned into out-romancing my male contemporaries while making reservations for a place I can barely afford with expectations that cannot be met. And I’m sorry, but even if you’re with the proverbial “t-shirt and jeans” girl, she’s a Goddamn liar when she says she wants you to do nothing on February 14th. Also, girls – the jig is up. 100% of you claim you’re a “t-shirt and jeans” girl. This is false.

So why am I authoring a defense for something I hate? Because I tapped into my generation’s insatiable craving for nostalgia and recalled my memories of Valentine’s Day when I was a little kid. My mom used to get up early to decorate the table and make us cinnamon rolls and bacon before school. Love will always involve bacon. And at each placemat was a small gift and a thoughtful card from my parents. It was always a good memory. And then we went to school to eat candy and exchange hilariously corny cards with culturally relevant images on them. I often gave out Michael Jordan cards that said something like, “Hope your Valentine’s Day is a slam dunk!” And for the girls I went with something real sexy, like Batman or Saved by the Bell. I wanted them to know I was interested, but I didn’t want to seem desperate. This is in exact opposition to how I am now. Back then, the day was always easygoing and fun and absent of the pimped out expectations. I didn’t feel alone and I didn’t go outside my means to make something “special.” I just celebrated loved ones and friends a little more than I normally would. I find that whenever you feel stressed or bewildered, it helps to remember what you would do if you were a little kid. My 8 year old self is always going to be the most clear-headed, incorruptible version of me. He also had mad windsuit game.

So at heart, Valentine’s Day can still be okay. Just don’t spend your time trying to be overly ironic or snarking it to the point where you become a cynical prick. And alternatively, don’t be a tool and overly concern yourself with heart shaped cliché standards if it compromises what your relationship really is. Grand gestures should be inspired by her personality. Chances are she doesn’t want you to complicate it. If she is waiting for a spectacle ripped from a blueprint romantic comedy, well then she kind of sucks, bro.

If you have a date, right on. If you don’t, you can always celebrate the people you care about. I’m alone this year, but I’m not lonely. I’m going to take part in Valentine’s Day the best way I know how: Grabbing beers with friends I love. If they’re lucky I’ve got an X-Men valentine with their names on it. Wolverine says, “I’m always ready…to be your pal.” At the very least, that’s what it’s all about.

Happy Valentine’s Day, whether you like it or not. 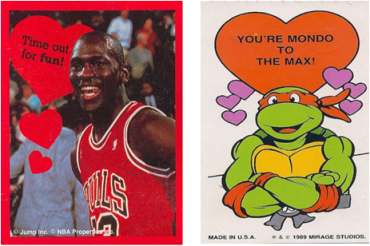 One thought on “You’ve Lost That Lovin’ Feelin’: The Polarization of Valentine’s Day”